Solastalgia, PFAS and the Psyche: Contamination at Williamtown, NSW.

By glennaalbrecht in psychoterratic, solastalgia on June 19, 2019June 19, 2019
No comments

Solastalgia is the lived experience of negative environmental change. As a psychoterratic (psyche-earth) experience and emotion, solastalgia is now well established in the global literature on place and its transformation.

Solastalgia has its origins in the Upper Hunter Region of New South Wales. In the late 1980s and the 1990s, while an academic at The University of Newcastle, I had been studying the environmental history of the Hunter River and the record of the pioneering ornithologists, John and Elisabeth Gould who had visited the area in 1839-40.

What struck me most of all in the history was the constant reference to the beauty of the landscapes of the Hunter Valley and the richness of its flora and fauna. Although land in the Valley was being taken from the Wonnarua people and cleared for agriculture, in the mid-nineteenth century it still had huge amounts of relatively untouched land that was in its pre-colonial state.

As European colonisation took hold in the Upper Hunter, farming families developed a strong sense of place and identity around rural villages, a couple of larger towns servicing agriculture and hundreds of relatively isolated farmhouses on acreage. The dairy, viticulture, cropping, thoroughbred, fruit and vegetable industries all thrived. A rural sense of place was built around productive landscapes in a pristine location that included clear, starry night skies. The region was once described as “the Tuscany of the South”.

As the coal industry moved into the Upper Hunter, the sense of place in the farming community came under assault. Open-cut black coal mining has huge negative impacts on virtually everything it touches. There are the explosions as the ‘overburden’ is removed, terraforming of spoil heaps, massive amounts of dust and noise from the draglines and trucks that move dirt and coal, water quality impacts from the coal ‘washing’ to produce ‘clean coal’ and particulate pollution from the trains that move the coal to the port of Newcastle on the coast.

In addition to the mines there are two massive power stations in the Upper Hunter and they too produce their own pollution in the millions of tonnes per annum. It was clear to me that this part of Eastern Australia was being invaded a second time, and the invaders on this occasion were the multi-national coal miners and the power utilities of the State Government of NSW.

The people in the Upper Hunter were distressed by what they were experiencing and I felt that they needed a new concept in the English language to give adequate expression to their feelings. Distress was too broad and ‘eco’ had already been put in front of too many words.

Solastalgia was created by me to acknowledge the chronic, negative emotional relationship between people and place that had emerged between the state of the earth and human mental states in the Upper Hunter. Ecosystem health was being degraded and at the same time, many people in the region were experiencing the desolation of their own sense of well-being and identity. Solastalgia had its origins in the direct social impact of mining and power station development in the Upper Hunter. There was nothing subtle about these impacts, they were openly massive and confrontational.

Another cause of human distress delivering solastalgia is the direct opposite of coal mining in that it is invisible. Per- and poly-fluoroalkyl chemicals (PFAS and PFOS) have entered the lives and properties of people living in close proximity to the RAAF base at Williamtown, NSW. The base is also the site of an expanding civilian airport and air services for the Newcastle region.

These chemicals have leached into the water table and are detectable only by scientific instruments. Their source is from fire-fighting foam used at the airport over many decades. The health and medical implications of exposure to PFAS are still being investigated but what is clear is that as a result of exposure, there are elevated risks of increased blood cholesterol levels, developmental effects in children, damage to liver and kidney function, immune system impacts and thyroid damage. There are also possible links to various types of cancer and they are being further investigated.

In order to ‘manage’ the impacts, the Department of Defence who own and control the land on behalf of the Government of Australia has declared a Red Zone of PFAS investigation (contamination). The zone of affectation includes 750 households and their properties in Williamtown, Fullerton Cove and Salt Ash.

The public health recommendation, as a result of having their properties contaminated, is for people to not swallow ground water or use it for drinking or cooking and that they should not eat food grown on their properties, including eggs.

From being an area that offered a high-quality lifestyle with generous access to ground water in times of drought delivering perennial green pasture for stock, especially horses, the people on these lands experience a textbook case of solastalgia and failure of government and its agencies to respond to the seriousness of the issues facing the residents. As a lived experience of negative environmental change, this situation for residents is intolerable. Every aspect of their lives has become a psychoterratic nightmare.

It gets even worse when various government agencies refuse to take responsibility for the loss of ecosystem and psychic health and no compensation has been offered to the owners of the contaminated land. They are left in limbo with depreciated assets that they cannot sell. As is the case with people in the Upper Hunter who lament “you cannot live next door to a coal mine”, the people of Williamtown and its surrounds can only live with dis-ease on top of land that is declared contaminated and a risk to human and ecosystem health. Yet, in most instances, because they cannot sell, they must stay where they are.

I have often defined solastalgia as the homesickness that you have when you are at home and your home environment is being desolated. The citizens of Williamtown, their children and their animals are imprisoned within an imposed solastalgia zone. By exposing their plight, by revealing the invisible emotional damage caused by PFAS to the psyche, it is to hoped that justice will be done.

To be published in ‘The Red Zone’ by Joshua Cowell in August 2019. 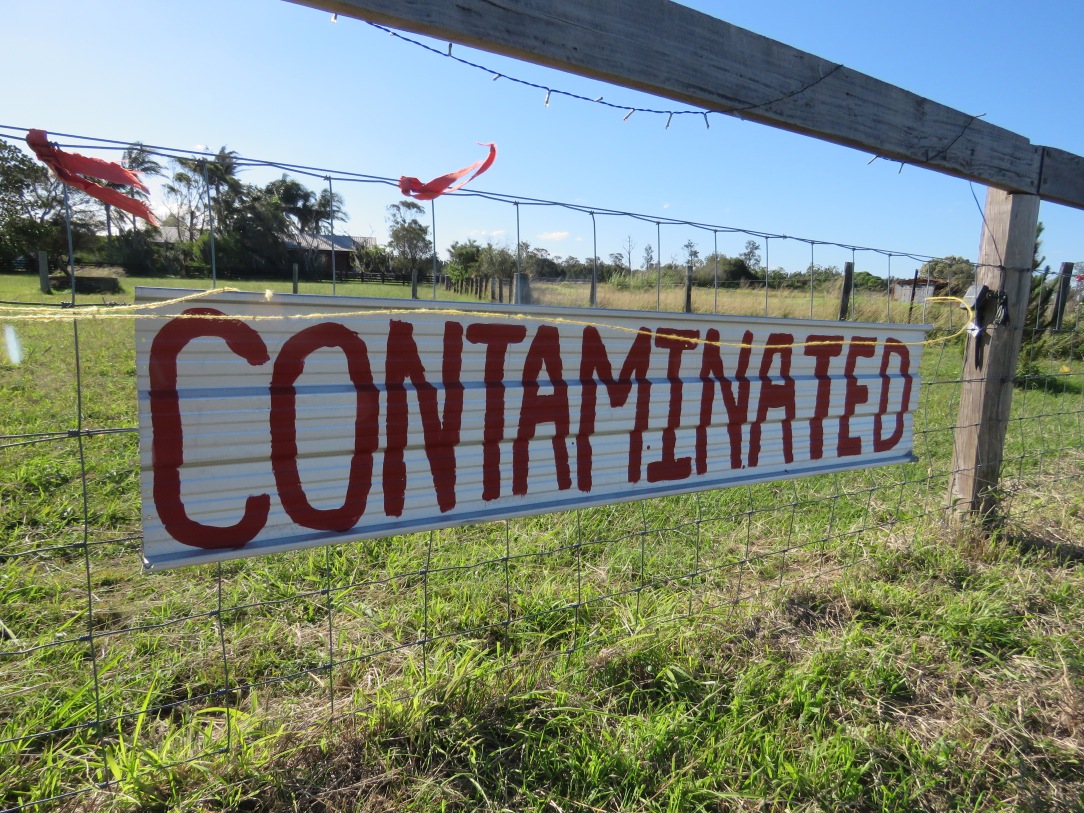