We must move Inland to Cessnock: Sea Level Rise in Newcastle, NSW, Australia

Climate science has been warning us about chronic, negative environmental changes for decades now. However, the scientists have been wrong on almost every front. Wrong in the sense that every prediction they have made has been shown to be mistaken. Climate reality, as it has unfolded, has been worse than their predictions. The science has been too conservative.

Global temperatures are rising more rapidly than predicted and 17 of the 18 warmest years in the 136-year global record have occurred since 2001. A person born after February 1985 has yet to experience a month that was at or below the long-term average global temperature of the late 1900s until the mid-2000s. That is, 32 years of consecutive annual global temperatures above the long-term average and we are already on track for 33. Globally, there have been many more hot records than cold records in the first 17 years of this century. If there was no warming trend happening, there would be a 50-50 chance of a hot or cold temperature record. Such records, all things being equal,  would also be increasingly improbable. Yet, in Australia, for example, there have been 12 times as many hot records as cold ones between 2000 and 2016.

Sea level rise is faster than was predicted, with increasing heat both causing expansion of world oceans and the melting of land-based ice. The latest science has increased the projected extreme sea level rise to 2.5 metres by 2100. However, as the global temperature increases, the rate at which land-based ice melts is also likely to increase. The recent (February 2018) record warming in the Arctic, and concerns about the speed at which the Greenland ice mass will melt, have raised the spectre of a 7-metre sea level rise if Greenland’s ice melts into the sea. The question now is; how soon will that melt occur and with Antarctica melting as well, what will be the total sea level rise? As one of the world’s leading climate scientists has recently argued:

“Greenland isn’t going to melt, it’s going to disintegrate. The forefront of research right now is forecasting how quickly that will happen and Greenland contains seven metres of sea level rise worldwide in its ice melt volume,”

The latest information about Antarctica is equally disturbing. The rate at which the ice mass is melting is on the rise, and  “there has been a sharp increase, with almost half the loss coming in the last five years alone.”

While there are sceptics and denialists who will rant and rave about what I am saying from their home pulpits, I must point out to them that they, (mostly men over 50), will be long dead by 2100. This message is mainly for those born in the twenty first century as they will custodians of the Earth in 2100. There is also no point in planning for a future minimum sea level projection of 0.3 of a metre.  We must plan for the extreme and hope we never reach it.

In order to focus our attention on the issue of the impacts of climate change and sea level rise here are the Coastal Risk Australia scenarios for Newcastle NSW, my closest seaside city,  for the 2-metre and 6-metre projections for sea level rise. It is now possible to do these projections for almost any coastal region in the world. The first image shows the Newcastle-Sydney-Wollongong coast of the State of NSW, Australia.

Fig 1. Newcastle-Sydney-Wollongong coast of the State of NSW, Australia. 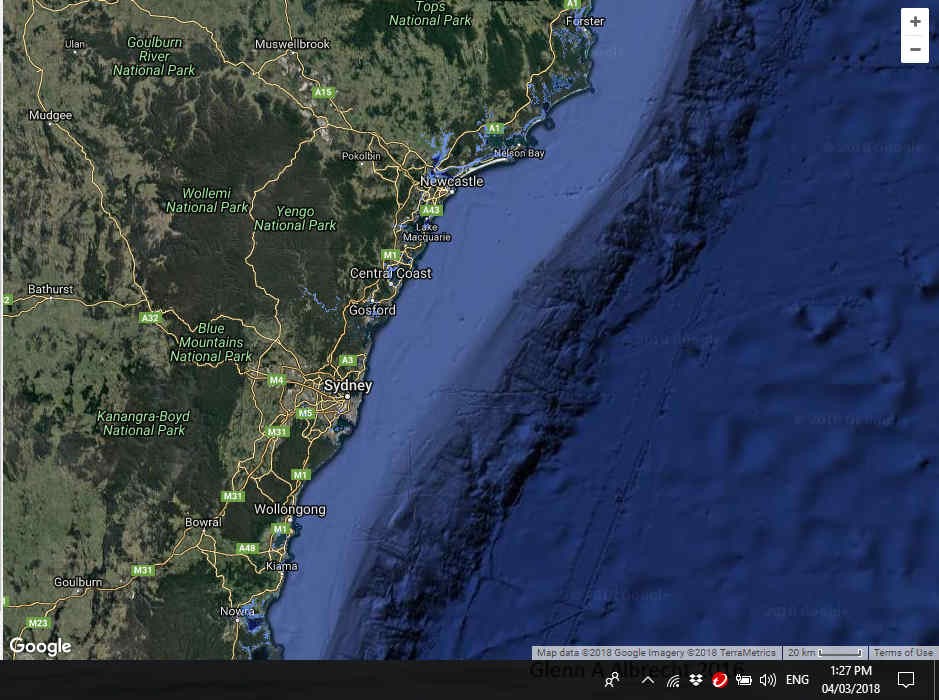 It is worth remembering that sea level rise has happened before globally and on this coast of Australia. From a recent discussion of historical sea level rise:

Then between 18,000 and 8,000 years ago, global climate warmed, leading to rapid melting of the ice sheets, and seeing sea levels in the Australian region rising from 125m below to 2m above modern sea levels.

We found that 2.12 million square km, or 20-29% of the landmass – a size comparable to the state of Queensland – was lost during this inundation. The location of coastlines changed on average by 139km inland. In some areas the change was more than 300km.

Much of this inundation occurred over a 4,000-year period (between 14,600 and 10,600 years ago) initiated by what is called Meltwater Pulse 1A, a period of substantial ice sheet collapse releasing millions of cubic litres of water back into the oceans.

During this period, sea levels rose by 58m, equivalent to 14.5mm per year. On the ground, this would have seen movement of the sea’s edge at a pace of about 20-24m per year.

On this projection you can see that the light Blue colour represents the extent of sea inundation at a 2-metre sea level rise. On closer inspection (below) you can see that much of Honeysuckle Drive (middle left) is submerged and many buildings facing the Harbour will be under water. The foreshore walkway adjacent to the Hunter River and the Port goes under as does a very large area of the portside Honeysuckle precinct. Areas where new buildings are proposed, such as on current public parking on the foreshore will be inundated.

Fig 3. does not indicate storm surge levels on top of the 2 metre sea level rise. In the flooding that occurred in 2007 in what has become known as the Pasha Bulker storm (Opening image is of the Pasha Bulker on Nobbys Beach, Newcastle), a surge of just under two metres entered the city of Newcastle and inundated 10,000 properties. Assuming the two metres of sea level rise, a similar storm surge in 2100 would cause 3-4 metres of inundation.

While ‘buyer beware of sea level rise’ might not operate in the current market with respect to real estate values, nevertheless, people would like their assets to be passed on to future generations. There is also the question of living zones and planning for the future which is the responsibility of Local and State Government. The sea level rise to two metres above current levels is a known, science-based risk to the City of Newcastle within the next 100 years. Inaction, failure to plan and adapt will be colossal fiscal and human risk failures by the current generation towards the future. Our children and teenagers should be revolting right now. Their coastal parents are about to blow their inheritance in all respects.

To make matters worse, Newcastle planning authorities are currently using data from 2007 to do the assessment of sea level rise in Newcastle West.

They use the following sea level estimates to predict sea harbour increase:

Clearly, the most recent data from climate science has made the planning for Newcastle West based on 2007 data, completely redundant. While the 3-4 metre storm surge scenario is bad enough, it could get worse. Some climate scientists are now modelling a flash melting of Greenland corresponding to an additional sea level rise of up to 3 metres. That, plus a storm surge, could see impacts of up to six metres by 2100. Such a scenario makes the current location of the City of Newcastle and its Port impossible for future security. Newcastle will have to be moved inland and it will have to be about 50 kilometres inland from where it is today.

It is evident to many climate scientists that we have a ‘built-in’ 2 metre sea level rise by 2100 due to climate change. Global failure to stop even two metres of sea level rise suggests to me that we must also plan for a global Greenhouse temperature rise of 4 degrees Celsius or higher. Under these conditions, preventing further land-based ice meltdown will be impossible. Given that there is up to 80 metres of global sea level rise if all the world’s land ice melted, there will need to be planning for a new inland city above the 80-metre mark from sea level. Cessnock, in the Hunter Valley, qualifies as it sits at about 100 metres above current sea level and the land goes even higher as one heads further inland (West).  In the Hunter Valley we should be thinking about the inland city of Cessnock as the Capital of the Hunter region.  It will link with other inland cities as the coast becomes nonviable.

Fig 5. Newcastle and the Hunter Region with a Five to Six Metre Sea Level Rise by 2100.

I have reached the conclusion in 2018, one day before my 65th birthday, that the 2-metre sea level rise for this Earth will happen by the year 2100. I am repulsed by this conclusion, as I know what havoc it will create for huge numbers of people world-wide. I have made it personal by focusing on my closest city, the birth place of my children. Their birth place will disappear at some point in the future, consumed by an ocean of water rising due to humanity’s own negligence in caring for this unique planet that houses life.

We still have time to stop the momentum pushing us towards a future possible 80 metre sea level rise and a world so hot that it is unimaginable. We must awake from a torpor that has prevented us from seeing the danger to our own future. How many more years of living in a heating world will it take? Frogs are smart enough to jump out of slowly heating water. Are we?

2 comments on “We must move Inland to Cessnock: Sea Level Rise in Newcastle, NSW, Australia”